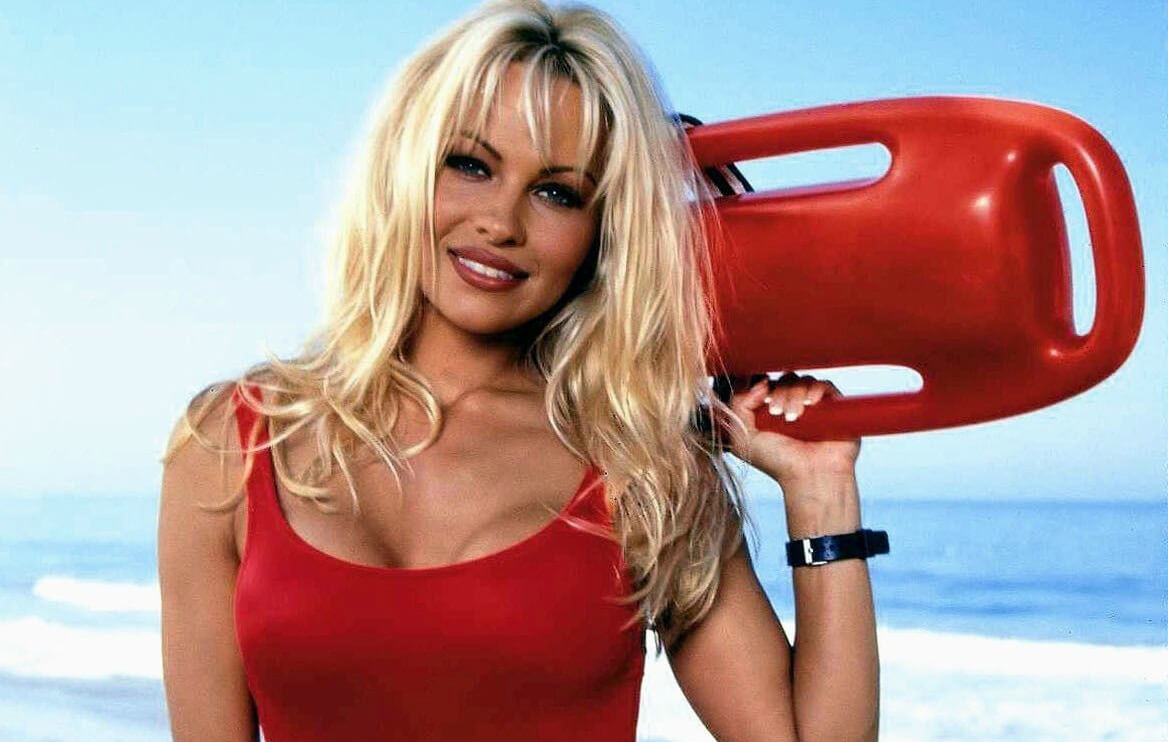 Popularity of TV shows is at an all-time high which means that a collaboration between online gambling and TV was only inevitable. The turn of the 21st century has seen multiple online pokies based on TV shows.

Leading software providers such as IGT and Playtech have been the first to capitalise on this market and have introduced online pokies that capture the look and feel of the shows they are based on. In the US, nearly 80% of all successful tv shows are converted into online pokies!

We have done a bit of digging ourselves and have uncovered the following online pokies that are based on popular TV shows. The article provides an eclectic mix of online pokies, some which make total sense while others seem like an odd combination.

First on our list is arguably the biggest TV show of the last decade, Game of Thrones. We refuse to believe anyone who has not heard of this show. The buzz, the popularity has spilt over to other medium with Game of Thrones merchandise out selling others by quite a margin (they even have GOT Funko Pops!)

Based on George RR Martin’s bestselling novel Fire And Ice, the show boasts excellent visual and sound effects backed by superior acting. It also helps that the show is littered with plot twists and character deaths that catch the viewer by surprise.

Microgaming were able to jump on the bandwagon and released a 5 reel online slot with 3 different rows and 15 paylines. This gives you 243 ways to win on a bet size that can be as small as NZ $0.01. Several props from the show make their way into slot. The wild symbols is represented by the show’s official logo as well as an Iron Throne symbol. 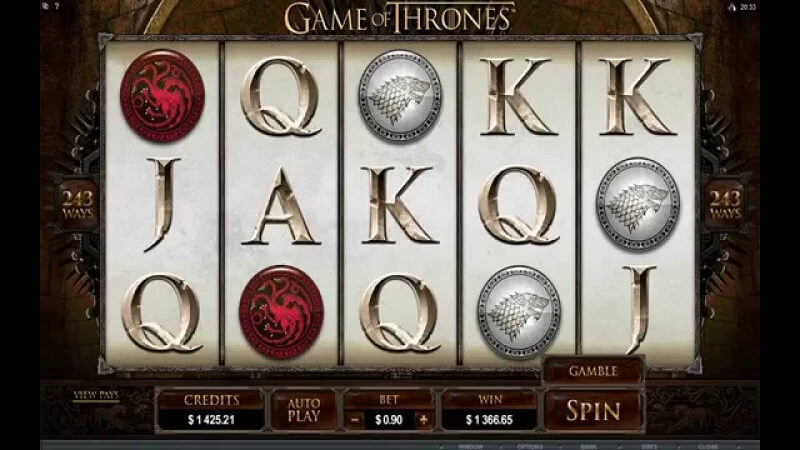 Get two Iron Throne scatters and you earn yourself a fiery dragon egg. This often leads to a random cash prize. The Free Spins feature is activated by getting three or more scatters.

Once activated the player gets to choose from one of the 4 houses – House Barratheon, House Lannister, House Targaryen and House Stark. Each house comes with its own set of spins and multipliers so choose wisely!

You also have the opportunity to wager all of your winnings on the spin of a rare ‘Braavosi’ coin. By doing this you stand to double your earnings and if successful, get treated to visuals from the show including White Walkers, Westeros with Direwolves as well the three dragons of Daenerys Targaryen.

The slot has been designed with a lot of love with elements from the hit show being faithfully recreated. In fact, we urge all software developers to look at this slot as example of how to develop TV themed slots. You can enjoy this online slot on Platinum Play casino.

From one thriller to another, 24 revolutionised TV dramas when it was first introduced in 2001. As the name suggests, each episode lasts for a total of one hour while a 24-episode series depicting 24 hours in the day. The show has been highly successful in keeping the suspense going and was at one point one of the highest rated TV shows of all time.

It has also gone to win several Emmys and has seen several regional adaptations across the globe. With unlimited merchandise potential, it was only a matter of time before the show would make its way into an online casino.

iSoftbet are responsible for bringing Jack Bauer into your computer screens and introduced the 5-reel slot in 2012. With 243 different ways to win, the slot features visual clips lifted directly from the show. These are played against a backdrop of the show’s hit theme meaning that you are always kept on the edge while spinning the reels. 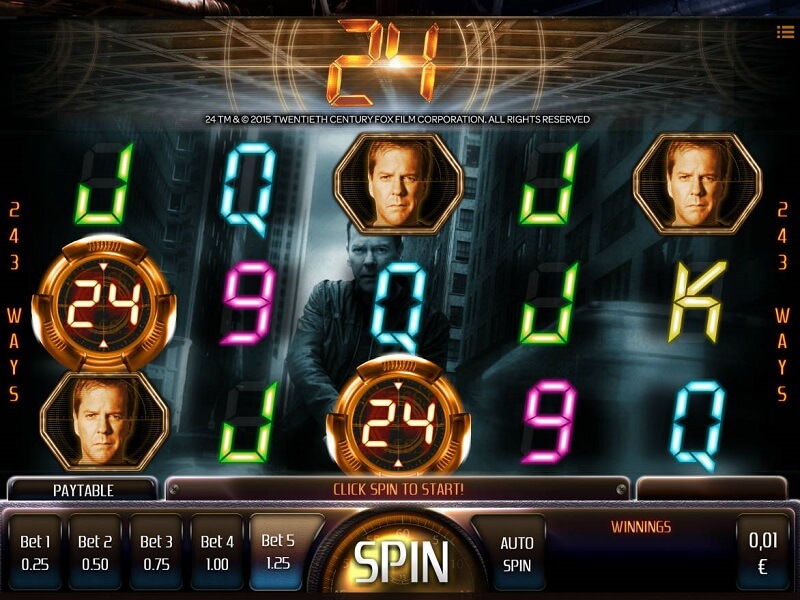 As is the case with themed online pokies, the 24 casino game takes design cues from the show and includes symbols such as guns, agent IDs and even Jack Bauer himself. The Free Spins feature is trigged when the agent ID appears on the middle reel. The 24 symbol activates the bonus feature.

Get three or more bonus features on the reels and the player will be taken to an alternate screen. And you guessed it, you will be required to defuse the bomb by cutting random wires.

If you are a fan of the show or have nerves of steel, then we would encourage you to head over to Voodoo Dreams casino to try out this fantastic online slot.

From dragons and terrorists to something more light hearted, we enter the world of Baywatch. First introduced in the 90’s, the show was known for its outlandish stories taking place on the beach amongst other things.

It managed to take the mundane life on a beach to spin out stories of love, betrayal and crime. It also cemented the status of David Hasselhoff and Pamela Anderson as bona fide Hollywood superstars. Most will recall the cheesy opening theme and the slow motion walk / run of the female actors no doubt ogled over by millions of teenage boys from all over New Zealand.

The show underwent many iterations including Baywatch Hawaii which as the name suggests led to a change in scenery. The plot line was similar to the original with the audience treated to even more skimpy outfits.

With a weekly audience of 1.1 billion in more than 150 countries, the show was turned into an online slot in 2015 by Playtech. The 5 reel, 20 payline slot borrows heavily from the show and displays Pamela Anderson’s character CJ Parker on the left side of the screen. CJ also serves as the game’s wild symbol while the beach tower acts the scatter symbol. 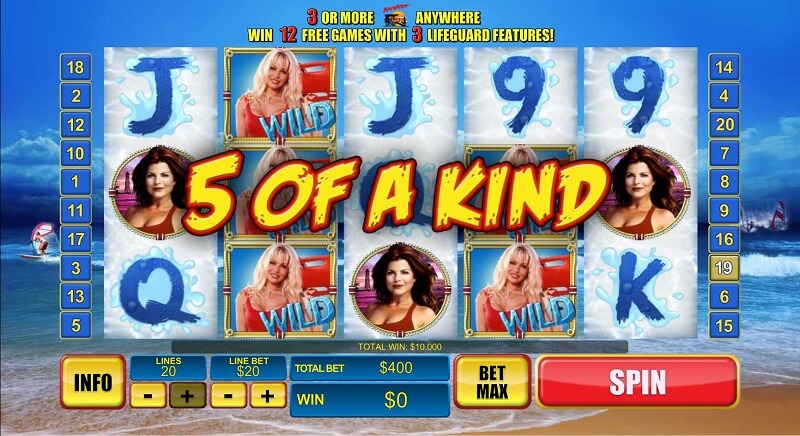 The slot comes jam packed with features as you would expect from a slot based on an American show. These include Rescue, Lifeguard Mini Bonus, Free Games, Caroline Holding, Matt Brody and the Neely Capshaw feature.

There is a lot to take in with this slot with its myriad of bonus features and design so cheesy that you cannot help but reminisce about the good old 90s. If you are convinced that this is how tv shows need to adapted into online pokies then head over to LeoVegas to enjoy this slot.to enjoy this slot.

Continuing with the cheese factor of the 90’s, we have Beverly Hills 90210. The show revolved around a group of high school friends and the issues they faced with regards to academics, relationships and more. The show ran for 10 years and the characters practically grew in front of the eyes of the audience.

The show was instrumental in launching the careers of several actors including Luke Perry, Jason Priestley and Shannon Doherty. The show did receive the obligatory reboot in 2008 but failed to generate much buzz and ran for five seasons.

The slot we have reviewed is based on the original show and offers five reels and 243 ways to win. You will be required to land three consecutive symbols from left to right.

The symbols feature the prominent cast members, these being David Silver, Donna Martin, Brandon Walsh (top paying symbol), Steve Sanders and Kelly Taylor. The wild symbol is depicted by a red sports car which substitutes every other symbol apart from the scatter.

The title of the slot acts as the scatter symbol and activates the free spins round if it appears three or more times across the reels. Speaking of free spins, the round starts with a short video clip of the cast walking on the beach. You are then required to select between the boys and girls, each providing different spins.

iSoftbet have done a good job with the slot in terms graphics and audio. While it may not be the most exciting slot on this of tv themed online pokies, it will surely bring about waves of nostalgia. This in our opinion is a decent excuse to try out this slot.

This slot would happily sit in the sci-fi themed online pokies list we did a few days ago. However, as you can tell, we have somewhat gotten carried away by the 90’s and have decided to include the slot here. The X-Files was beamed onto our TV screens more than 25 years ago and was one of the best sci-fi dramas of its time.

The show follows the adventures of two FBI agents, Fox Mulder and Dana Scully investigating unusual cases. The cases were not the typical homicide cases that you would expect your FBI agents to solve but instead focussed on paranormal events, UFOs and alien abductions.

What made the show exciting was the relationship between the lead characters. Mulder was the ‘believer’ immersing himself in outlandish theories in a bid to find the truth. Scully was more pragmatic, practical with her approach and was often found disagreeing with Mulder. Despite the differences they both worked together to solve the cases and would often stand triumphant at the end of the episode.

The show has been converted into both a land based and online slot. The land based conversion was handled by Aristocrat while Playtech took over the online duties. Playtech are well versed when it comes to creating slots based on Hollywood properties. They have done countless DC and Marvel themed online pokies. 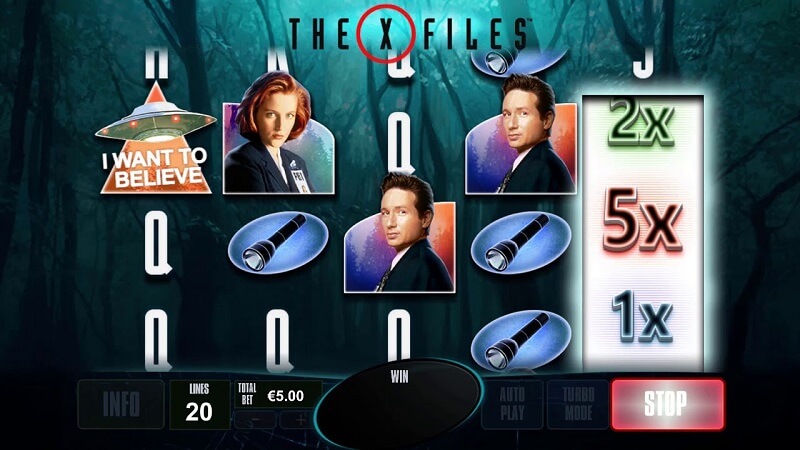 The X-Files slot is played on 3×5 reels with 20 paylines. You can spin for as low as NZ $0.01 with a max bet of NZ $500 per spin. The main symbols include Moulder, Scully, FBI torch and an alien hand. Unlike other online pokies that have one primary symbol, both Mulder and Scully are the main symbols in this game offering the same payout.

Multiplier wilds substitute regular symbols in the game except the scatter symbols. There are four different values for the multipliers – 1x, 2x, 3x, or 5x. Wilds add a 10x prize to your bankroll and four and five wilds return 40x and 200x.

As online pokies go, this is a good attempt but we can’t help but think that maybe Playtech could have done a lot better. While the music is atmospheric it is not taken from the show. And while you to do get to see the main characters on the slot, the lack of video footage from the show makes this slot seem a bit ordinary.

It would have been amazing to see the actual aliens or monsters from the show make an appearance on the slot. We are hoping that someone at Playtech has also had the same realisation and are working tirelessly to update the slot!

That’s it from our list of online pokies based on TV shows. We started with a fantasy based slot featuring drama over the throne. Next up things got a bit intense with Mr Bauer trying to stop terrorists from blowing up America.

The last three online pokies on the list were all lifted from TV shows in the 90’s which meant great games with a heavy dose of cheese factor. These online pokies can be enjoyed at most casinos listed on the site.

We would recommend paying a visit to either Casimba or Voodoo Dreams if you want to play these games.